in the heart of the Tertiary Area

The cave that has been opened up forms part of an underground system that was formed at the beginning of the Tertiary era, in other words, about 60 million years ago.

Between that era and our own, the cavity evolved through a series of changes, which is even now quite difficult to piece together. What one can say is that the flow of water that carved out the galleries and deposited alluvia slowed down with the deepening of the river-valleys. Following climatic changes, the cave was subjected to complex phases of in-fill by sand and clay, washed in from the exterior, alternating with phases of further carving-out. The concretion visible today dates from the latter period, spanning thousands of years, and can only have been formed in those voids that were not affected by sand and clay in-fill. 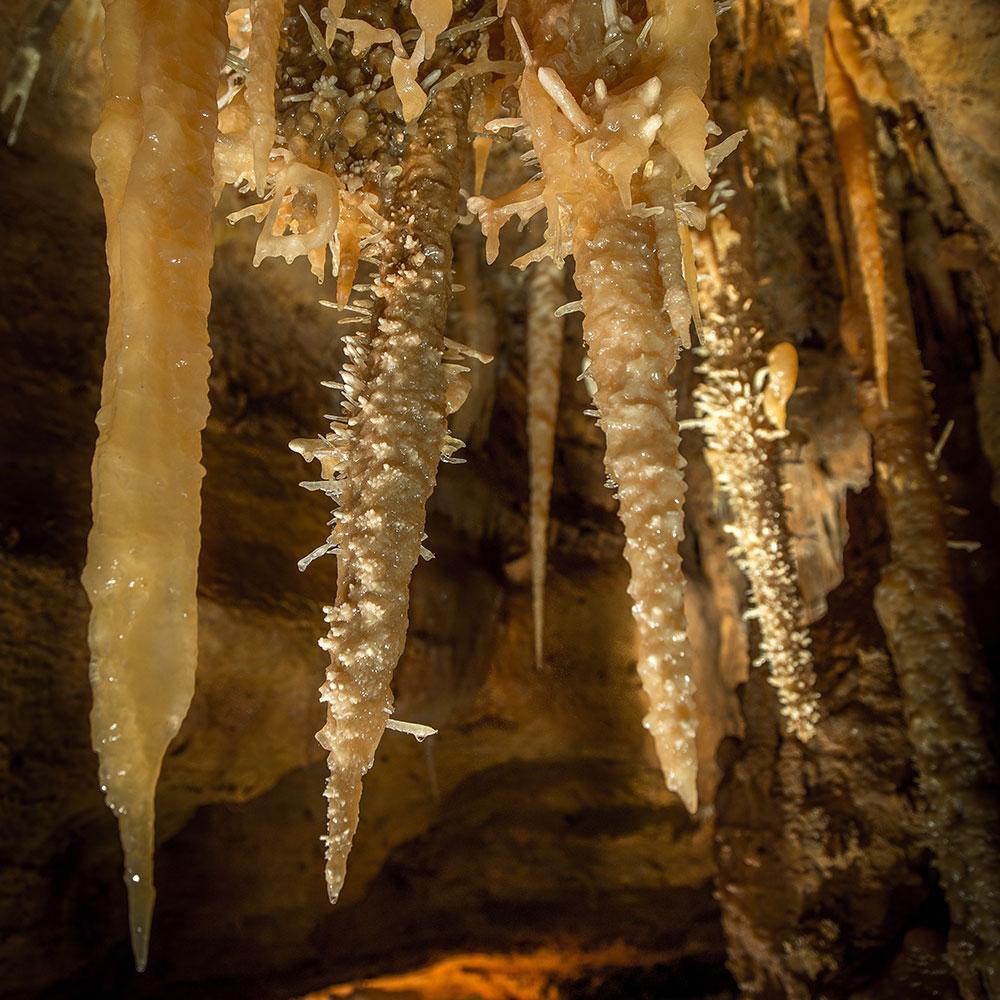 A PERFORMANCE OF A RARE QUALITY

What makes for the importance of this cave is the quality of its concretion.

This is the term used for mineral deposits that form on the walls of a cave by crystallisation of calcite (calcium carbonate) carried in solution by infiltrating water. When this water drips from the roof of a cavern, it deposits a small amount of the calcite that was dissolved in it. Over the centuries, this produces a more or less cylindrical cluster of calcite crystals that forms downwards, which is called a stalactite. Similarly, a deposit is formed on the floor of a cavern when a droplet of water falls, forming little by little what is called a stalagmite. One can understand that, following the intensity of the infiltration of water, the shape of the galleries and other conditions, these concretions can take on extremely varied forms, in the shape of columns, draped fabric, etc. 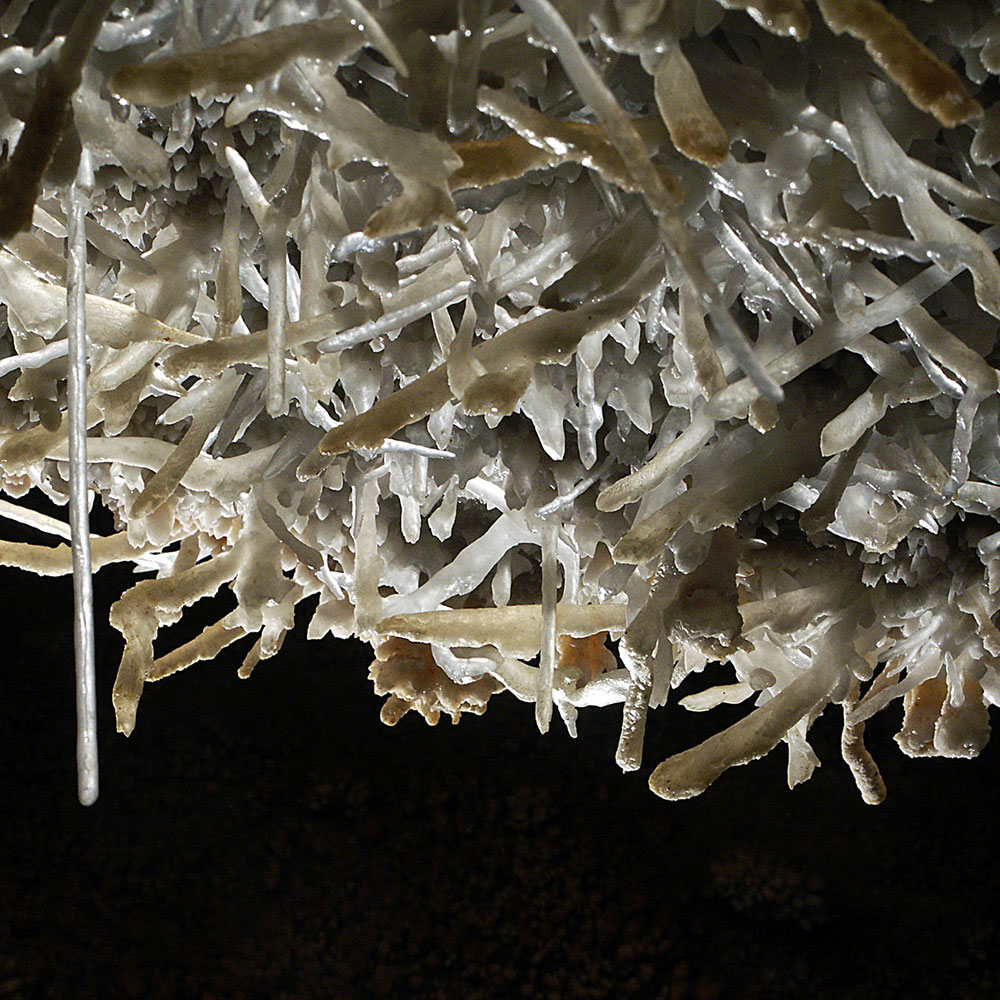 Between curiosity and rarity

The shapes of concretion formed by calcite which are both the most rare and the most curious are those referred to as eccentric.

This type of concretion forms finger-like patterns, twisting in all directions, seeming to defy the law of gravity. It is made possible by a combination of several factors: the particular porosity of the rock, and a constant but very slight flow of water through the roof of the cave. In this way (and to simplify a little) the water, laden with calcium salts, evaporates against the cavern wall without falling to the ground (furthermore, that leads to the formation of very few stalagmites in the cavern). The water weeps slowly, penetrating all the porous sections of the cavern wall and of the concretions that have already formed. The water is subject to the force of capillarity, on this scale greater than the force of gravity, and can climb just as well as it can descend. In this way it deposits particles of carbonate in every possible direction, seeming to defy, as one often says, the law of gravity. 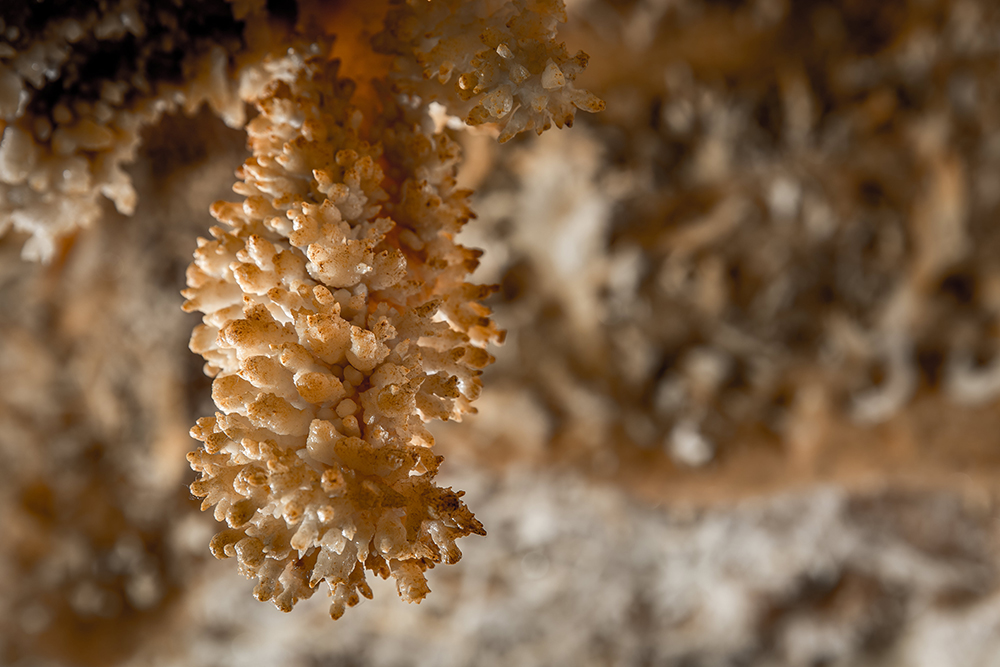 A masterpiece of Nature

where the criteria of the porosity of the limestone, the flow of water filtering onto the walls and the micro-climatic conditions of the cavern all coincide to allow their formation.
It is precisely this type of eccentric concretion that one may observe in the Maxange Caves. They form bouquets that decorate the roof and walls over a considerable distance. Their profusion, delicate form and purity, sparkling under rays of light make a display of rare quality, which fully justifies the project of development.
The Maxange Caves are one of the finest examples of what is referred to in geological terms as a “geode”. 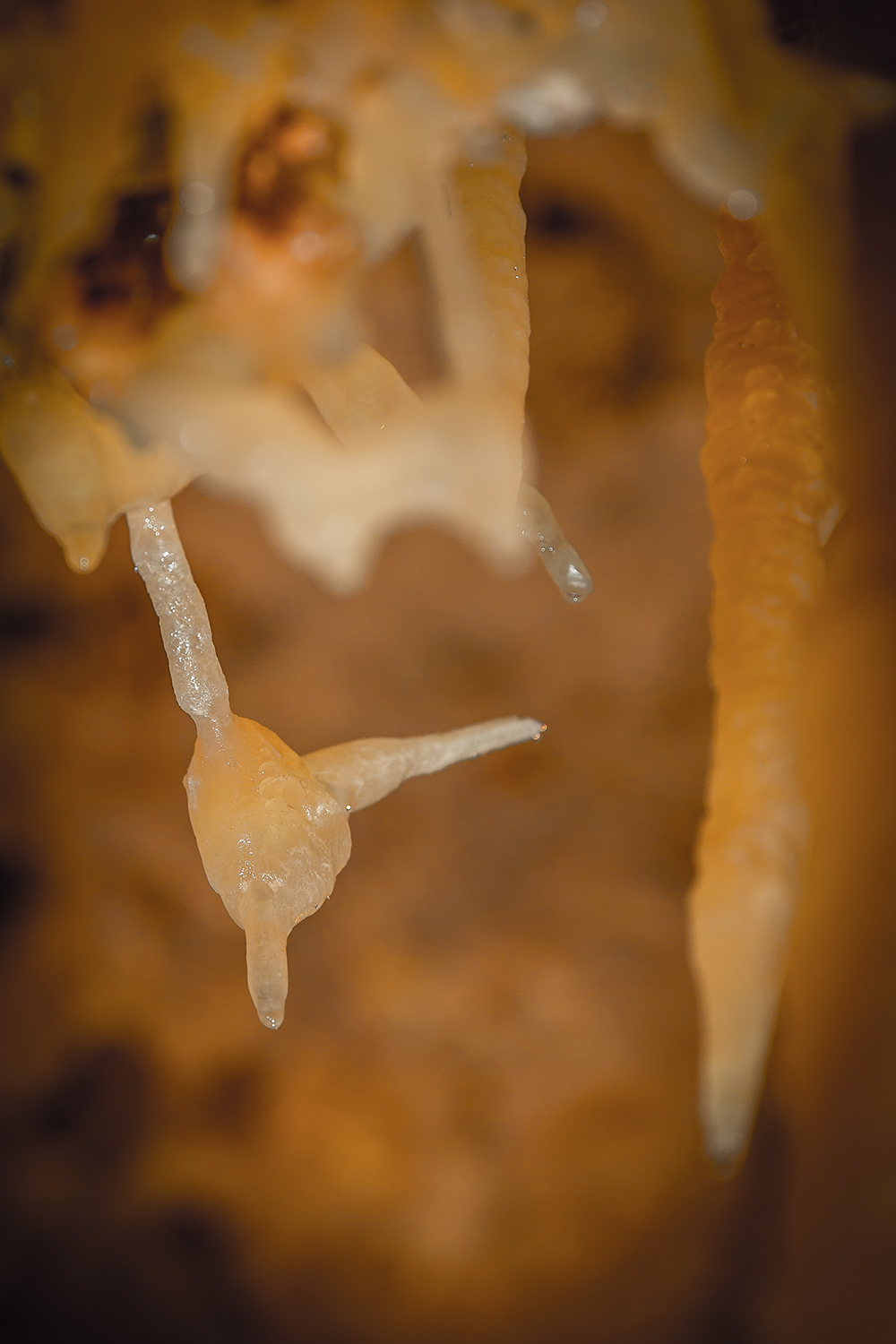 On August the 15th exactly, discovery of the Caves by Angel Caballero.

Beginning of the development

Start of huge work to allow visitors access to this jewel.

On April 20, the first amazed visitors can enjoy this unique site.

A new gallery is discovered as an extension of the existing one.

The path is getting bigger

Opening to the visit of a new gallery until then inaccessible.

On March 13, the state recognizes the uniqueness of Maxange and classifies it on the heritage list.

I book online
Schedules, rates and services on site
We use cookies on our website to provide you with the most relevant experience by remembering your preferences and repeat visits. By clicking on "Accept", you consent to the use of ALL cookies.
Cookie settingsACCEPT ALLREJECT ALL
Gérer le consentement

This website uses cookies to improve your experience while you browse the website. Of these, cookies categorized as necessary are stored on your browser as they are essential for the functioning of basic functionalities of the website. We also use third-party cookies which help us analyze and understand how you use this website. These cookies will only be stored in your browser with your consent. You also have the option of deactivating these cookies. However, disabling some of these cookies may affect your browsing experience.
Necessary Always Enabled

Advertising cookies are used to provide visitors with relevant advertising and marketing campaigns. These cookies track visitors to websites and collect information to deliver personalized advertisements.

Other unclassified cookies are those that are being analyzed and have not yet been categorized.

SAVE & ACCEPT
Powered by